Our fabrics have been especially developed over many years to achieve faultless results when cutting, hanging, and installing with the sole aim of a perfect result every time.

All the CUT Screen is coated with “nanozone SOLUTION” for anti-virus and anti-bacterial, implemented by A-PLUS.
(Applied to all the screen shipped on and after 1st January 2021)
*nanozone COAT Official Contractor: A-PLUS Co.,Ltd.
Implemented by A-PLUS,

“nanozone SOLUTION” is an innovative technology for cleaning and sanitizing system from Japan. It is water soluble liquid which is contained ultra-fine particles of self-bonded titanium oxide.Super Nano Titanium Dioxide and photo-catalysis technology can be expected to have excellent effects against bacteria and virus. It keeps the effects for a long period of time and totally harmless to the human body.

*Evidence Based (in Japanese language)

Titanium oxide in “nanozone SOLUTION” absorbs light from sunlight, ﬂuorescent lamps, LEDs, etc. and exerts a strong photo-catalytic action. Light energy is converted in ultra-ﬁne particles of titanium oxide, and that energy generates super-oxide (O) on the surface of O2 particles in the air, and in water, it generates hydroxy radicals (OH-). 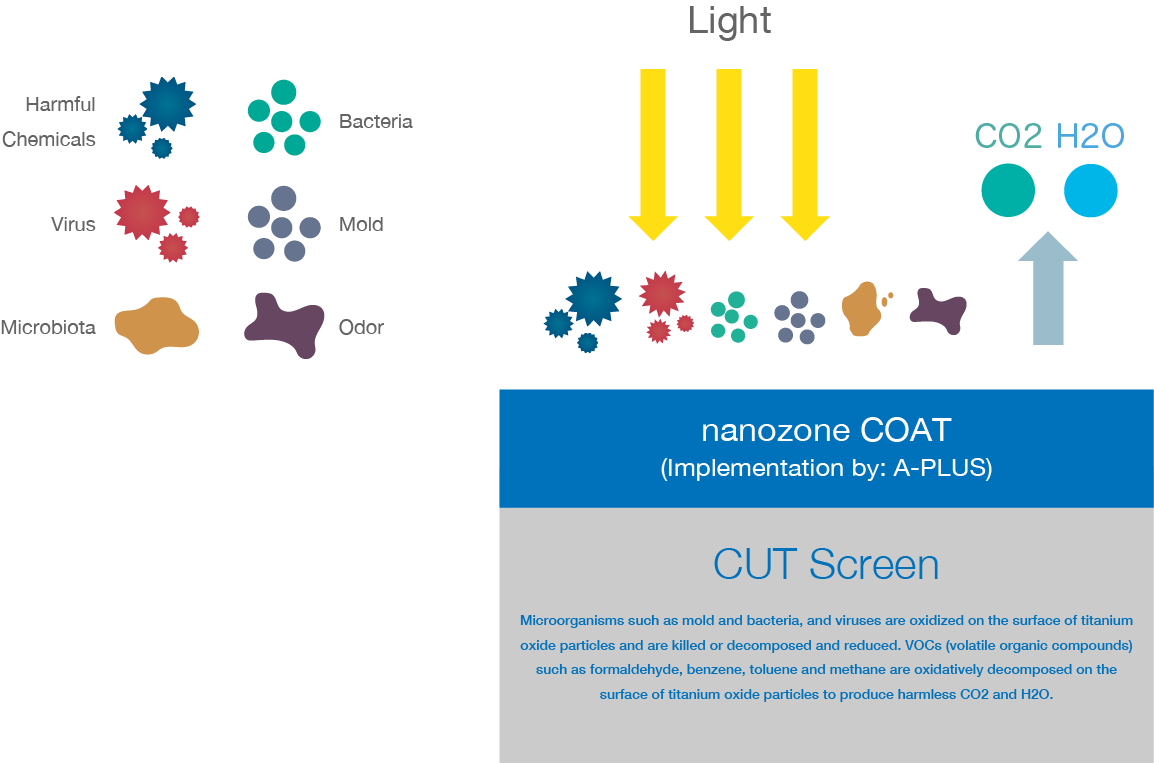 Ultra-ﬁne particle
The size of titanium oxide is the world's smallest ultra-ﬁne particles of 2-3 nm. Which has no physical weight and is therefore no longer affected by gravity. In such a 2 nanometer-sized world, the properties of matter do not depend on Newtonian laws, It depends on the quantum mechanical law.

Invention
We have solved the contradiction of a major issue for titanium oxide photo-catalyst products which has been investigated over the last half century. Our solution is that avoid to use binder (adhesive) which covers the active surface of titanium oxide. This increases dynamically the efﬁciency of the photo-catalytic effect and it’s theoretically achieved.

High potential energy
Ultra-ﬁne particles move at high speed in water, since it has a great opportunity to absorb light energy. It diverts extremely high photo-catalytic activity. (A wide range of light energy from 200 to 500 nm)
Ultra-fine particle titanium oxide in an aqueous solution adheres and bonds to the surface of any substance by the quantum physical force of the particle itself due to the intermolecular force. After construction, if the water evaporates, the titanium oxide particles themselves will bond strongly to all surfaces for a long time.

Conventional titanium oxide has a large particle size and the coating is unable to stay on the surface by itself. It needs an adhesive to stay on the surface but the adhesive inhibits to exert its intended effect. Another disadvantage of the conventional titanium oxide has small surface area of the particle, it means that needs strong sunlight to exert its effect.

“nanozone SOLUTION” is consists of the world smallest nano particle (2 nano) and does not need adhesive to stick on the surface. The all titanium oxide particles are actively provide an exerting optimum performance, and the particles stick each other and stay on the surface with intermolecular force.